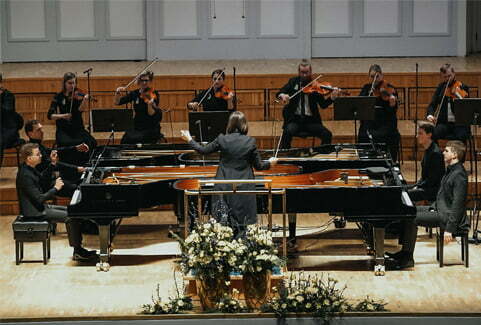 A metaphysical order of the Universe seems to be woven into the constructions of Johann Sebastian Bach’s sound systems. It is both noble and serenely enlightened as well as aristocratically danceable and energetically affirming. His works show a wide range of human emotions – jubilance, joy, zest for life, as well as sadness, solemnity and deep piety.

The legendary 20th century conductor and composer Leonard Bernstein has said: “For Bach, all music is religious and the creation of it was a kind of worship. Every note was dedicated to God and nothing else.”

Bach composed all his concertos for piano (at that time for harpsichord) between 1729 and 1741, when he took over the leadership of the so-called Collegium music evenings.  They took place at Cafe Zimmermann in Leipzig, which belonged to the owner of the coffee house, Gottfried Zimmermann. Twice a week, the Collegium Musicum, an ensemble of professional musicians and students, gathered there for joint musical evenings, where Bach was responsible for composing a new music.

Bach was also the first to create a harpsichord concerto and give the instrument a solo role. Until then, the harpsichord was mainly an accompanying element in the ensemble. The concertos for two, three and four pianos (except BWV 1061) are, according to historians, Bach’s own recompositions of the composer’s previously written instrumental concertos for violin and oboe. It’s true that most concertos of these instruments have not survived.

Concerto for two pianos in C minor BWV 1060 is a polyphonically dense opus with a richness of sonorousness. It is believed to be a lost transcription of a D minor concerto for two violins.

Johann Sebastian Bach’s Concerto for two pianos and orchestra in C major BWV 1061 is a sunny and vital composition in which the two solo instruments are constantly in a close and intense dialogue, playing out sixteenth-note strings. It is interesting that Bach entrusted the most difficult tasks for pianists to the left hand, which plays the bass line. This is the only concerto that is not a recomposition, and was originally composed for two harpsichords.

The Concerto for two pianos in C minor, BWV 1062, is a recomposition of the popular Concerto for two violins in D minor, BWV 1043. Like with other recompositions of violin concertos, it is transposed a second lower to better suit the range of the harpsichord. The composition is dated around the 1730, when Bach wrote harpsichord concertos for himself and his sons. They played them at the Collegium Musicum music evenings.

In the Concerto for three pianos in D minor, BWV 1063, Bach actively played with the relations between melody and polyphony. Sometimes all the soloists play the same melody, but at other times everyone goes their own way. Bach achieved the effect of all three soloists sounding like one combined instrument, even when in a polyphonic relationship, playing distinct and independent parts. That’s true, the most virtuosic part in the first and second parts is entrusted to the first soloist, but in the third part everyone gets to do some expressive solo gesture. There is evidence in music history that this Bach’s concerto was actively played on the piano in the 19th century. The most remarkable time was when Felix Mendelssohn, Franz Liszt and Ferdinand Hiller played three solo parts.

Concerto for three pianos in C major BWV 1064 has been called one of the composer’s most impressive instrumental compositions by Bach’s biographer Philip Spita. But conductor and harpsichordist Lars Ulrik Mortensen believes that this is Bach’s most interesting concerto, and that it has far more conversation than any other Bach’s concerto. All the soloists mostly act as an entirety, and the small solo passages only have the role of sonic effect. In the last part, Bach entrusted the musicians with real solo episodes, where we can hear arpeggios, moderate bass line with a moving accompaniment and dramatic chromaticism.

The Concerto for four pianos in D minor, BWV 1065 is the only one not based on Bach’s own music. It is Vivaldi’s Concerto for four violins, Op. 3 (L’estro armonico) No.  10 recomposition,  Vivaldi’s collection of 12 concertos, L’Estro Armonico, gained popularity throughout Europe, including Germany, in the first half of the 18thcentury. Bach was well known for this collection of Vivaldi’s concertos, Op. 3, and transcribed several concertos from it.  In his Concerto for four pianos, Bach added even more magnificent ornamentation, inner voices, accompaniment and rhythm to Vivaldi’s original material, giving the opus a special luxury and richness of texture.

Pianist Reinis Zariņš is one of the most notable Latvian talents, a master of deeply thought-out interpretations, a soloist and chamber musician, a participant of conceptual inter-art projects. Reinis has won prizes in eleven international piano competitions and received the Latvian Grand Music Award four times. He has recorded critically acclaimed albums and performed in prestigious concert venues such as The Concertgebouw in Amsterdam, Weill Recital Hall and Steinway Hall at the Carnegie Hall in New York, Wigmore Hall and Steinway Hall in London, Glazunov Concert Hall in St Petersburg, Tchaikovsky Concert Hall in Moscow.   His concerts have been broadcasted on BBC Radio 3, Radio Poland and King FM radio stations. He enjoys the subtleties of chamber music playing with the Trio Palladio.

The young pianist Daumants Liepiņš is one of the most recognised musicians of his generation. In 2019, he won the prestigious The Vendome Prize competition, getting the opportunity to give a solo concert at the Verbier festival and record an album for the Steinway recording company. He has also become one of Latvia’s leading musicians, having received the Grand Music Award in the category “Young Artist of the Year” in 2017. In March 2019 Daumants won first place in the Maria Canals International Piano Competition in Barcelona, and ​​in 2018 – second place in the George Enescu International Piano Competition. Studied at Jāzeps Vītols Latvian Academy of Music under Prof. Arnis Zandmanis and in the Ingesund School of Music at Karlstad University (Sweden), under Prof. Julia Mustonen-Dahlkvist. In the autumn of 2020 Liepiņš started his residency at the Queen Elizabeth Music Chapel in Brussels.

Sten Heinoja is an Estonian pianist of the new generation who has won many international competitions. Studied at the Estonian Academy of Music and Theatre and the Royal Academy of Music in London In 2021 he began his doctoral studies at the Estonian Academy of Music and Theatre, writing a dissertation on the modernism piano pieces of the Estonian composer Marta Saare. As a soloist and chamber musician, he has performed in many places in Europe, China, USA, Israel, Japan, Russia.  Viennese classics and music of the 20th century have a special place in the pianist’s repertoire. Sten Heinoja has given concerts with Kymi Sinfonietta, Tel Aviv Opera Orchestra, Estonian National Symphony Orchestra, Moscow Chamber Orchestra, Jerusalem Symphony Orchestra under the leadership of conductors such as Tenu Kaljuste, Olari Elts, Arvo Vollmer, James Fedex and others.

After Anna Duczmal-Mroz’s debut at the famous Bad Kissingen Festival, the German press described her as a “sensational conductor”. Anna started her career in music as a violinist. Her talent for conducting was revealed when, by chance, the young violinist had to conduct a student orchestra rehearsal while studying at the Hannover University of Music, Drama and Media.  In 2004 Anna Duczmal graduated from the conducting class with distinction, standing in front of the Netherlands Radio Philharmonic Orchestra.  In 2003 she made her debut with “Amadeus” Chamber Orchestra of Polish Radio, and since 2009 Anna has been the conductor of this orchestra. She has performed with many Polish orchestras, such as Warsaw Philharmonic Orchestra, Sinfonia Varsovia, Poznań Philharmonic Orchestra, Wrocław Chamber Orchestra Leopoldinum, Krakow Philharmonic Orchestra, Sinfonietta Cracovia and others. In 2007 together with Capella Bydgostiensis under the leadership of Anna Duczmal, a record with music of the 20th century was launched in the DUX record company. She also teaches master-classes at the Paderewski Piano Academy. The conductor regularly records music by Polish composers on Polish radio.

Tallinn Chamber Orchestra was founded in 1993 by conductor Tõnu Kaljuste, who returned to the role of artistic director in 2019. Over the past 30 years, the Orchestra has become a recognisable symbol of Estonian music all over the world. The collective’s comprehensive repertoire comprises the period from the Baroque to the present day, paying special attention to premieres. Among the conductors of the Orchestra were Juha Kangas, Eri Klas, Risto Joost.  Together with the Estonian Philharmonic Chamber Choir, the Orchestra recorded several Estonian music albums: Te Deum (1993), Litany (1996), In Principio (2009) by Arvo Pärt, Crystallisatio (1996) by Erkki-Sven Tüür, etc. In 2013, the Tallinn Chamber Orchestra received a GRAMMY Award for their participation in Arvo Pärt’s Adam’s Lament album.